Tokyo stock exchange – one of the largest exchanges in the world, by market capitalization of daily deals is second only after NYSE. The share exchange accounted for about 80% of total exchange’s turnover of Japan. Relates to affiliates, is not profitable (is not the purpose of getting income), included in the exchange community of Asia and Oceania.

While European and American stock market companies tend to enlargement, with the aim of expanding the supply of tools, constantly considering options for mergers and acquisitions, Asian markets on the contrary are seeking to expand their own capabilities and development. The Tokyo stock exchange was founded in 1878, the year and only in 2013-m to year she has teamed up with the stock market of the Osaka, forming Japan Exchange Group, Inc.

Unlike European and American markets, where the founders of the sites were merchants, the Ministry of Finance of Japan created the Tokyo stock exchange. At the end of 1800-ies in connection with scientific and technological progress, the country’s government creates many stock exchanges in cities that were the trade centers. In 1943, similarly, on the initiative of Japan, the individual stock markets of the cities are combined into a single exchange system based on the Tokyo stock exchange.

During the war, the work of the TSE was temporarily suspended, but securities transactions were still performed. However, the auction purchase and sale of securities conducted directly between investors and owners of shares and bonds.

The heyday of the exchange came in the 80-ies. After the war, the country was actively developing scientific and technological capacity, in connection with which there was a growth of the number of companies, their capitalization, and in revenge to them, and stock turnover. In 1968, the regulations were adopted that clearly defined the powers of the brokers and the rules of exchange trading. With the growth of turnover, the exchange is gradually being transferred to electronic form of trading that immediately attracted investors from all over the world: if until 1974, there even was no electronic scoreboard on the stock exchange (the prices were written in chalk on a blackboard), then in 1990-th on the Tokyo stock exchange was focused about 60% of the world stock market. NYSE then became a leader, but the second place was firmly preserved by Japan.

In 1999, the Tokyo stock exchange moved to a fully electronic trading system.

An interesting case of 2005. Company J-Com held an IPO (initial public offering) on the TSE. An employee of the company, supporting the transaction (Mizuho Securities) put the erroneous quotes: instead of 610 thousand yen per share 1 yen for 610 thousand shares. Although staff exchanges quickly stopped trading, the losses of J-Com were 347 million dollars, which was reimbursed by the exchange and Mizuho Securities 50/50. It is believed that to a greater extent the fault lies with TSE – electronic system was to bring the price of the order in accordance with market prices, because the volume of transactions was greater at 214 times than the number of shares of the company.

Electronic systems often cause problems with the transactions. So, for example, in 2001, on the TSE  broker’s manager of UBS Warburg by mistake swapped the number of shares and their value, the losses in 2 minutes amounted to about $ 100 million. In 2003 on the NASDAQ due to the error of a manager the shares of Corinthian Colleges fell on 30% for a few minutes. And while TSE and NASDAQ gain in the speed of processing applications brokers at the NYSE, where 80% of transactions done by live traders, the losses from such errors are much less. 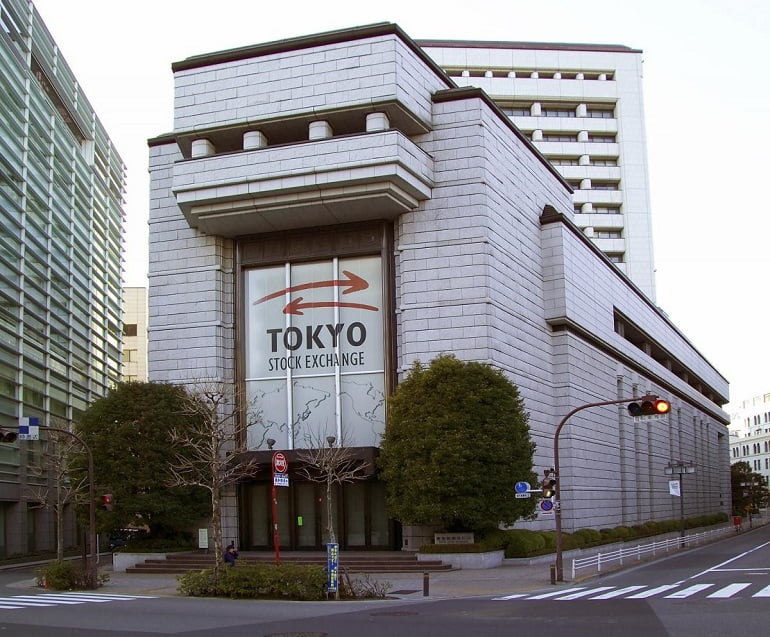 Today the shares of more than 2,300 companies worth over 5 trillion dollars are traded on the stock exchange. The monthly turnover is about 600 million dollars, which is comparable to volumes of trading on the NYSE. According to the results of transactions on the stock exchange the two main index are formed, which are indicators of the Japanese economy: NIKKEI and TOPIX.

TSE management – 9 Directors, 4 auditors, 9 Executive officers, at the head of whom is the Chairman.

Shares are divided into three parts:

Main functions of TSE: the mobilization of funds and financing companies. Over 80% of participants (investors) of the stock exchange are investment banks, hedge funds and other financial institutions, while individuals represent less than 20% (direct participation in the auction is permitted only brokers-legal entities). Here financial support receives the state, which places bond on TSE . Thus the stimulation of precisely those types of business industries that are necessary for the development of the economy.

The mechanism of implementing transactions with securities:

This is a quite simplified diagram, because in reality the approval and registration of trades occur electronically and checked by multiple systems. However, as we have written before, errors are still unavoidable.

To sum up. The Tokyo stock exchange (its structure and working principles) is quite fundamentally different from European and American companies, but from this, it does not cease to be less attractive to investors. The area is actually under the control (supervision) of the state and seeks no income, and regulation of financial markets and monetary support entrepreneurship in Japan. In the future development of the Asian market (in particular, the growth of China’s economy and Japan after a long decline) can cause the stock markets of China and Japan to intercept the lead from their European and American competitors.