NASDAQ is a specialized stock exchange of the United States, the scope of which includes high-tech company sectors of software, electronics, innovative developments in technology. It is among the three largest US exchanges, along with NYSE and AMEX (belongs to NYSE Euronext. Both exchanges are the divisions of  ICE).

A feature of the exchanges is that NASDAQ is a structural subdivision of the organization NASD (hence the name of the exchange), which at the present time is called FINRA (US regulator). Also NASDAQ is under control of SEC. So careful monitoring by regulatory bodies does not prevent the exchange giant to develop its area of influence. For example, in 2000 the NASDAQ attempted to buy LSE (London stock exchange) twice and after the rejection tried to by all its stocks, that were in free circulationи , bringing the percentage up to 28%. Today NASDAQ owns 8 European exchanges.

NASDAQ was created in 1971 based on National securities dealers association. The organization’s aim was to computerize the securities market. At the moment of its creation the company could provide OTC quotes of about 2,500 companies. The ability of electronic transactions attracted companies such as Intel, Cisco, Apple, Oracle, Microsoft, who were able to quickly attract seed capital on this platform.

NASDAQ initially positioned itself as a data base, a kind of “message boards” where brokers were presented and the average of the best quotes of securities. Further development of the exchange was aimed at creating automated systems that would have accelerated (simplified) transactions: 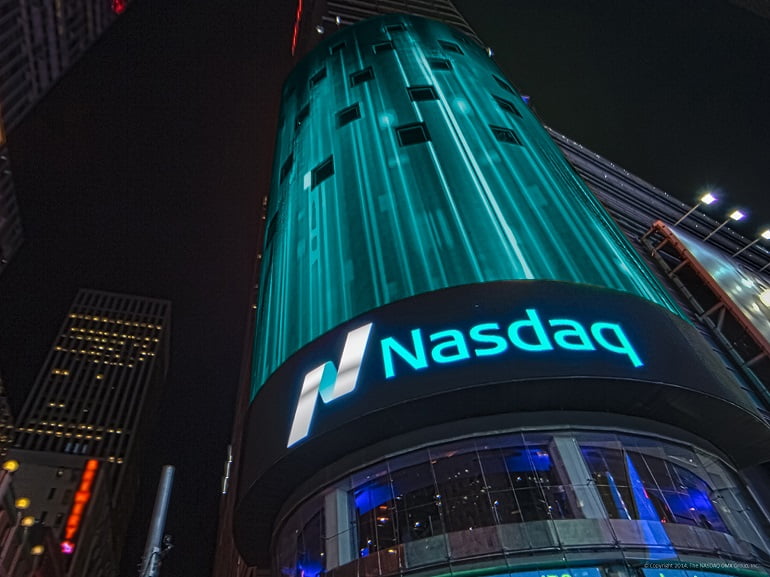 The implementation of a convenient system of electronic trading allowed NASDAQ to become one of the leaders of world trade securities. Today the exchange provides not only services for transactions but also services on the systems of risk management and clearing. Monthly trading volume on the NASDAQ is 34-42 billion shares. At the end of trading, the indexes are formed, which are closely watched by traders from all over the world:

In total, NASDAQ group controls 26 markets, 5 depositories, and 3 clearing companies all over the world. The electronic trading system of the stock exchange is able to process about 1 million requests per second.

Trade on the NASDAQ differs from the standard trading. About 600 of market makers (broker that buys securities and holds them for further sale to the trader on his own risk) compete for the execution of client orders (orders to buy or sell). The task of the NASDAQ market makers is constant maintenance of quotations of the underlying asset and its liquidity. If there is a deficiency of the asset on the market (which inevitably could lead to an increase in its value) the market maker executes a customer order at the expense of own reserves, thereby supporting the price of securities. 15-50 market makers support the average liquidity of one kind of shares. The NASDAQ indexes are formed on the basis of market-makers ‘ quotations or on the basis of data from other trading systems.

To sum up. The secret of NASDAQ success is pretty simple: the stock exchange managed to catch the trend of the 70-90-ies and to attract companies in the technology sector, capitalization of which has increased tenfold over the last 30-40 years. Now the exchange is trying to go towards the creation of a unified Intercontinental trading platform that allows NASDAQ to compete with other global exchanges for decades.