Most of the technical analysis indicators are developed by the European and American traders. Moving averages, RSI, Bollinger bands — all the property of the European and American continents. All of these indicators are already discussed in the Internet and in previous articles. Today I suggest to get acquainted with the Ichimoku Cloud indicator, which was developed by Japanese traders and it is also used in the trade as binary options and Forex.

Ichimoku Cloud indicator was developed in the 1930-ies and is designed to determine the lines of support and resistance of price trend, the definition of entry points into the market. The formula is quite complex — the indicator improved for about 30 years and was officially published only in 1968. The tool consists of 5 different lines, the construction of which are based on separate indicators. We can say that the Ichimoku Cloud indicator is an aggregated tool, which involves moving averages, MACD and Momentum.

Technical application is difficult and can have multiple interpretations, which you will be described below. In addition, the signal for entering can be only one in a trading session. Such a rare signals are not of interest to novice traders because this strategy can be useful to professionals who are willing to high profits with minimal risk – experienced “fish” that get pleasure from the process of waiting for a signal.

The indicator relates to the trend ones, even though it works on the flat. The essence of the indicator — 5 lines:

The last two lines form a so-called Ichimoku Cloud. The most important signal for the trader is when the price crosses the Senkou span B. If the price chart crosses the trend line upwards — the trend is ascending (you can open a buy trade), from top to bottom — for sale. It is believed that the very moment when the price goes beyond the cloud is the most strong signal to market entry.

Used trade interval – 4 hours and more. Experts say that the trade comes from the cloud. That is, until the price is in the cloud, fluctuations in prices are not considered strong, whereas a break of the support level or resistance (cloud boundary) means the price strength. The following is an example of a great moment when a trader can open a contract for sale — the price is actually “bounces” from the borders of the clouds and goes down. 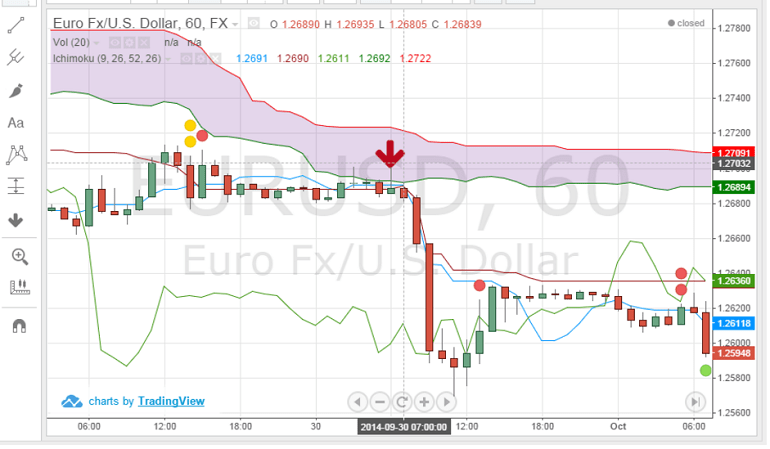 Below the second figure shows an example of a fairly successful entry into the market for purchase, however, less pronounced. Here you need to connect candlestick analysis, estimating the length of the candles and its tail.

The nuance of the use of the indicator is the duration of the trade. It is recommended to work in the range of 2-3 candles. In other words, if the trader uses the time schedule, you  need to open for 2-3 hours, no longer! If the chart is daily, the deal should last 2-3 days. Execution time is selected by the investor individually while testing the strategy on different assets. In addition, you can use other indicators, such as stochastics. 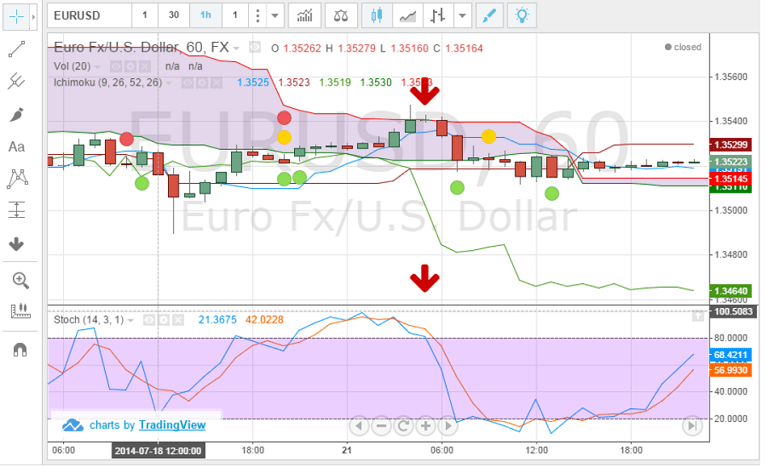 As soon as the price trend touches the border of the cloud (it is not clear whether there would be a reversal or price would break the level and go up), the stochastic will show the level. The image above shows that the asset is overbought, and hence imminent reversal is expected.

The benefits of using the strategy on the indicator Ishimoku:

The second side of the Ichimoku

I have just given an example when the strategy was based on bounces from the borders of the cloud. Moreover, trade within the cloud is not recommended by experts, but I will give you a reverse example. This tactic in options trading involves scalping (quick) transactions between the cloud boundaries. The following is an example of successful entry into the market to buy when the price fluctuates within the range.

The principle of trade in the cloud is the following: wait, when price comes into it and fixes inside. Once the trend approaches the border of the cloud it will not be able to break through and will reverse  – open the position. In most cases, this reversal is a major one –  the price goes to the opposite border. Ishimoku indicator is exactly correct with respect to the strength and direction of a trend.