The merger of two leading European exchanges od Deutsche Boerse and LSE was announced in March After completion of the transaction, the created organization should become the same level by the volume of trades as the largest exchange companies like ICE, СМЕ and NASDAQ. The United stock exchange will become the second in the world in terms of trading derivatives (after CME). Previously Deutsche Boerse already made attempts to unite with LSE and NYSE Euronext, but because of antitrust obstacles, these attempts ended in failure.

Deutsche Boerse is one of the largest exchange organizations in the world, which is created in the form of a joint stock company. The Central office is located in Frankfurt am main and has offices located throughout the world, from Hong Kong and Tokyo, to Chicago, new York and Moscow (covering more than 50 countries). The structure of the organization includes:

About 97% of all trades in Germany are held on Deutsche Boerse platforms. Such indicies as the DAX and EURO STOXX 50 are formed based on commercial trades. On Eurex there are trades not only with futures and options, but also with specific financial derivative instruments as warrants and certificates.

Interesting fact: despite all its power and volume in the profit structure, Deutsche Boerse trading in securities does not occupy a leading position. There is much more interesting market of clearing services in connection with the company’s emphasis on technological and marketing development. This fact attracts traders to the exchange by providing huge liquidity.

Deutsche Boerse actively developing its clearing and settlement system. As at the end of 2015, more than 55% of trading volume are accounted for issuers outside Germany (of which 55% about a third of issuers from the USA, 20% English). Access to the exchange have traders from more than 40 countries of the world, the daily number of transactions – more than 500 thousand.

The date of Foundation of the exchange is considered 1585, when a group of merchants joined together to adopt a unified exchange rate. Gradually, the exchange has evolved, taking on the role of the shopping center. The leading position of the exchange was held in Germany in 1949, and in 1993, on its basis the Deutsche Boerse was established. The exchange drawn more than 11 thousand securities of multinational companies and corporations, 24 thousand securities fixed-income, 1 million structural instruments (warrants).

Interestingly, despite the official existence of the exchange since 1585, their entire exchange was only in 1694 All issues related to exchange rates, were decided by the merchants during their walks together.

Trading of securities on the stock exchange is carried out in three sectors: 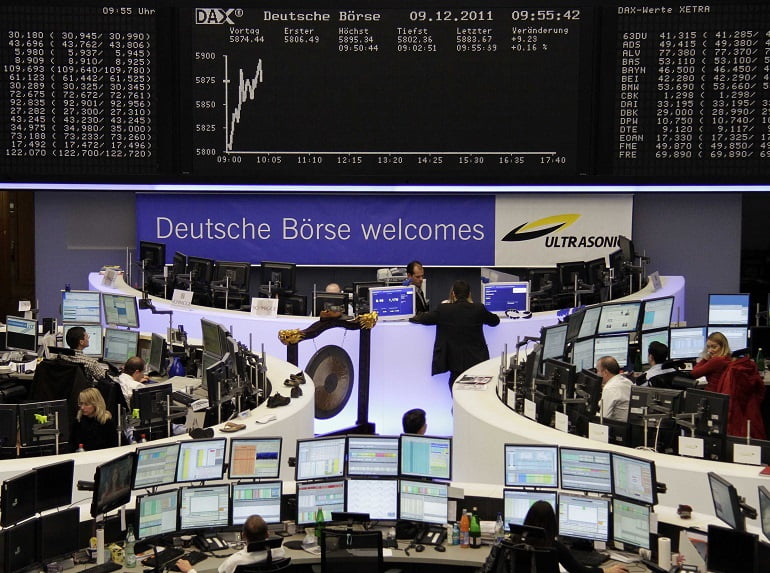 Date of Foundation of the exchange – 1998. The exchange was formed by the merger of two small areas of Germany and Switzerland, but within a few years was able to take first place in Europe in terms of electronic trading of derivatives. In 2001, the volume of transactions amounted to more than 674 million a year, in 2006 – 1.5 billion. It is the largest derivatives exchange in the world, where there is annually more than 2.3 billion transactions. In 2007, was attached to the Deutsche Boerse and was entirely under its control in 2012.

The electronic trading system, a high-tech product of Deutsche Boerse was launched in 1997. Its implementation gave an opportunity to provide an adjustable and controlled interaction between all traders who have access to the platforms of Deutsche Boerse in the world. Its principles of operation are the following:

Accuracy, speed of transactions made trading system Xetra best in the world in 2011 and now this system is used by more than 250 participants of exchange trade (the smaller exchanges and liquidity providers, for example, Shanghai, the Bulgarian, the Vienna stock exchange) from 19 countries. The trades with more than 46 thousand trading instruments are held on the basis of trading system.

The Luxembourg company, which was attached to Deutsche Boerse in 2000 and is a huge depository. Today, it retains assets worth more than 11 trillion euros, almost 4 times more than German GDP.

Another activity of the unit – clearing. Thanks to the perfect technology Clearstream handles more than 10 million transactions per month. The company also manages collateral and provides management of assets.

To sum up. The success of Deutsche Boerse in its non-standard approach to the stock market. At the time when other exchanges aimed to extend the financial instruments for traders and followed the path of uniting with each other, Deutsche Boerse made a bid for the optimization of the implementation process of trading. Innovative technological solutions used by other exchanges made Deutsche Boerse  one of the leaders of the world stock trading market.