Investments in ETFs are gaining popularity among Russian investors in the power of simplicity, profitability and saving time. Purchasing securities of the ETF funds is similar to the purchase of shares of domestic mutual Funds. Funds can also be both targeted and diverse, but their essence is simple — they work with all the stock and currency markets around the world, the investor needs only to choose a reliable Fund and to decide what asset he would like to deal with.

Investment in ETFs with hedging of risk

ETF — index Fund, which shares are on the stock exchange. The difference from mutual Funds in that shares of the funds can carry out the same operations as the securities of ordinary companies. The value of securities is determined by the yield of the fund, i.e. the profit it generates at the expense of profitable investments. Using ETF funds, domestic investors solve a few problems:

And yet there are also ETF at a loss and subsidence. One of the reasons is currency risk. For example, you work with ETF on the U.S. market, assets denominated in dollar. But as soon as you buy European ETF shares, you take on currency risk. Securities will increase, but because they are denominated, the profits will be eaten due to the fall of the Euro currency.

That’s what happened with those who did not take into account the likelihood of the Euro’s decline in November-December and invested in ETFs, not while being protected from the fluctuations of currencies. Yes, there are funds that work for hedging strategies, i.e. hedge positions against a possible depreciation of the currency rate. As example, take two funds: 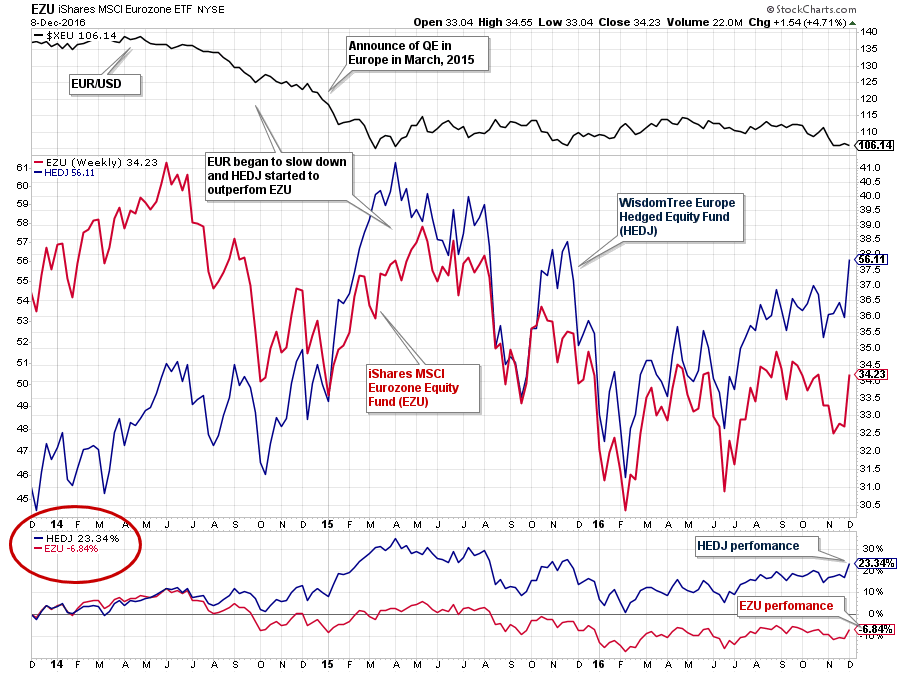 Despite the fact that the two ETF Fund have relatively the same set of securities, but their dynamics and impact are different. In 2015 year, the ECB announced a quantitative easing (its effectiveness is debatable). After its launch in March 2015, the Euro against the dollar began to go down, EZU trend also went down, whereas the trend HEDJ resisted from the strong reduction. The result from investments you can see on the chart – the profit from the hedge funds ETF — 23,34% of the ordinary Fund loss of 6.84%.

Summary. Investments in ETFs are not protected from exchange rate fluctuations, as by investing in one currency while the other category ETF-Fund may incur a loss even with the growth of the portfolio value. The reverse effect — a synergistic growth, but we like the conservative strategies. Therefore when choosing an ETF, pay attention to whether the Fund insures its risks.

How to capitalize on the holiday discounts