The tradition of “Black Friday” became so popular that it quickly spread around the world, and the concept of “black Friday” has become a common noun the time when the goods can be bought with discount up to 50%. Someone spends money and someone earns it! How to make money on black Friday — discussed below.

How to make money on Black Friday

In the period of the holiday (Christmas) discounts retailers earn about 30% of annual income, that logically leads to a sharp rise in the stock price. According to statistics, every year the customers become increasingly active. It is expected that this year over three days in the U.S. will make purchases of about 137,4 million of people (3.6 percent higher than last year). In general, during the pre-Christmas period (November and part of December), Americans will spend about 655,8 billion dollars, in 2015 year this figure was 626,1 billion.

The reason for the growth of the cost of the purchase will increase the percentage of young Americans that primarily will seek to buy clothes, shoes and gadgets. Interesting statistics: approximately 86% of buyers — people aged 18-24 years. How to make money on black Friday? Below are the most promising companies from the point of view of short-term investments, whose shares can go up, in spite of possible loss for the year. 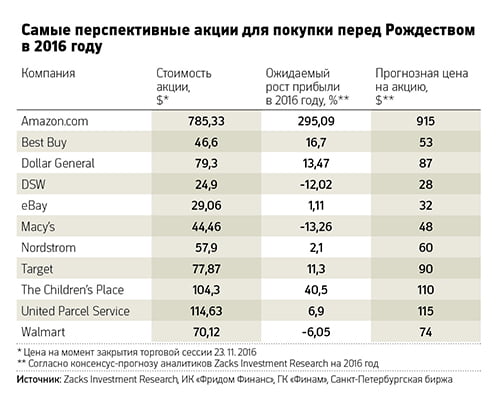 According to analysts, more income will have companies that  sell consumer electronics, adult and children’s clothing. In percentage terms, growth of stocks can range from 3% to 40%, however, the rapid rise may be followed by a quick decline. Influencing the volatility factors will be:

Reverse rollback is expected to close by mid-January, but last year showed that only some companies rollback was 100% of growth. The rest of the shares sagged to a maximum of 20-50% of the growth during sales.

Analysts also recommend to look for local retailers that also followed the tradition of discounts. You can invest in exchange-traded fund SPDR S&P Retail ETF, which invested in the 10 largest retailers in the USA. For those who are thinking about how to make money on black Friday, we recommend to hurry up because the stock has already started to go up.

Biotech: bubble or the future?

How to invest in other countries with minimal risk