The economic calendar is another very good tip for the trader about which direction can change the direction of the trend, for example, the currency pair after a news release. Some investors render the calendar in the ranking of the individual strategies, considering that it can be a good idea to trade with binary options, exposing the right period of expiration. And although this is a rhetorical question, the calendar of economic events should be considered separately.

This calendar is a table of major news from different countries published during the trading session. Despite the fact that some of the news may not have a significant impact on the stock, it is still worth a look, as they can be harbingers of serious fundamental events.

How to work with an economic calendar: 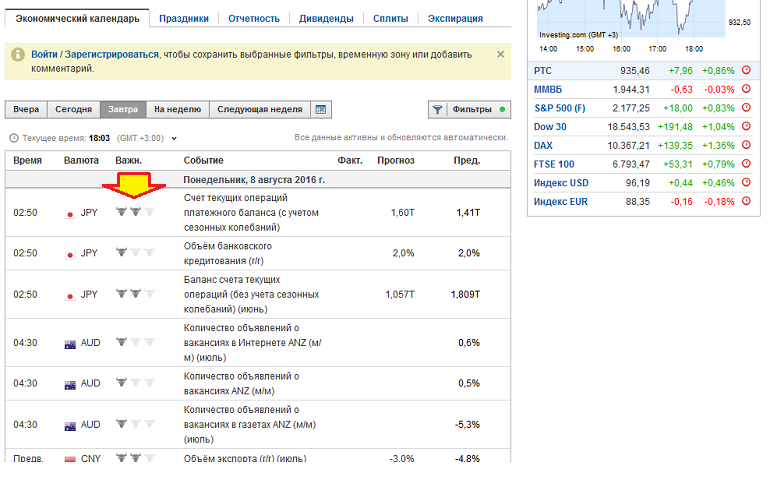 And now about the main use of the economic calendar. It’s not so much the essence of the news, but in its conformity to the predictions!!! For example, the publication of data on unemployment reduction in the US — positive news? Can we assume that the dollar will rise? It seems to be positive, but we cannot judge the trend of the exchange rate, because we do not know the forecast data:

If column “Fact” value is colored green, it means the result is better than forecasted numbers (positive factor), if red – the result before the forecast is not reached (negative factor).

You can also use the filter at the top of the menu, putting the news data from only a certain country or go to an interesting indicator to see the history of its changes. 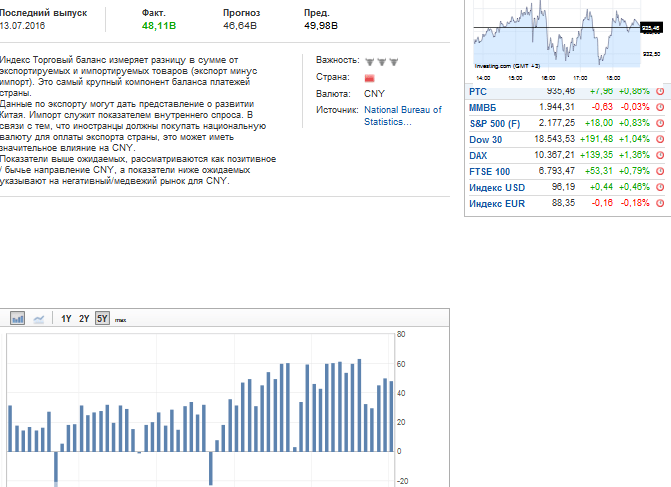 Example of the use of data of economic calendar:

Once the news were published and all indicators were in red, it was concluded that the pound will fall. Options were immediately purchased by for a fall for several currency pairs (the pound is paired in the first place) with an expiry time of 1, 2 and 5 minutes (different times due to the fact that at the same time to quickly buy all the options). After 5 minutes the rate fell for all currency pairs related to the pound, bringing profit.

And I still think that the impact of the economic calendar in the formation of strategies is too exaggerated. A vivid example is the change in the discount rate the fed and the ECB in December 2015. After the announcement of the fed’s decision about raising rates, it was assumed that the dollar will go up, but forecasts of this decision was so obvious that investors have already laid those expectations even before the release of news. The fed’s decision did not affect the rate, but the ECB decision, investors reacted much more actively. Because by itself the publication of news is not the fact that investors will react.

Summary. The economic calendar is considered as the main strategy is quite dangerous, but it is an indispensable tool in the analysis of the trading on the news. Moreover, in binary options from the calendar much is more useful, since it is important only to determine trend direction without slippage inherent in Forex. If you consider yourself to be professional trader, the economic calendar should be open 24 hours a day.

How to trade on vacation