In October 2015, the financial regulator Belize IFSC reported a page on their website that the broker (the financial company) PANTEON FINANCE LTD no longer has a license controller for the implementation of securities for trading and brokerage activities. In his message, the offshore regulator warned investors about the due diligence. Everything seems normal, but the company “Pantheon” ceased its operation in January 2015, and in May all the offices were closed and activities of the company were stopped. 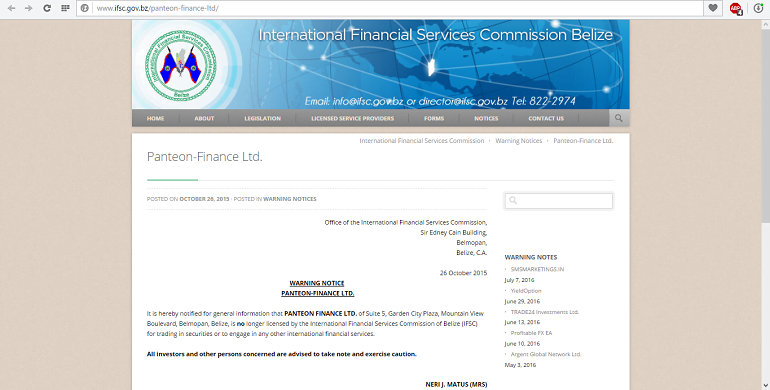 This article is just a statement of fact, and we in no case do not throw a shadow on the brokers who have registered with the offshore regulators. In addition, there are many cases where their activity is allowed to prevent fraud. However, still insist that caution still should be.

The company “Panteon Finance” burst on the Forex market in 2010, and obtained the license of the IFSC controller. The basic direction of activity — PAMM-accounts. The company’s offices were located in Russia and Ukraine.

In early January 2015 “Pantheon Finance” has ceased to perform its obligations, and in May completely shut down its offices and website. Potential clients starting in May physically could not become a customer of the broker, however, the reaction of the financial regulator followed only in 9(!!!) months. Partly to justify can be that offshore regulators do not have full access to controlled companies (data can be obtained only with the consent of the licensee), but formally, the regulator would have to conduct quarterly reporting.

Given the above, the question arises: what general damage control may be involved if the regulator does not track any activity of the company?

Affected customers repeatedly wrote to the regulator of its claims, but received only an automated message about delivery of messages. And the fact that since May 2015, the company “Panteon Finance” in fact remained on the website of offshore regulator, is funny. Alas, it is unlikely that the report, dated October of 2015, could be helpful to anyone.

This whole situation is a reminder to traders that offshore regulators are not serious protection. And more serious regulators in the U.S. and Europe — it is not a panacea, but credibility to them is still more.

Fraud schemes in the stock and currency markets