It  happened that before this I considered a simple expert advisor based on several indicators. And if someone saw something complicated, sorry… CandleBot compared to them is something poorly amenable to understanding. I do not know who created such a monster, but the robot exists for more than 7 years and still it is a huge field for experimentation. It is universal (suitable for any currency pair), but can not always work independently. In other words, CandleBot allows semi-automated trade.

CandleBot — candlestick trading for every taste!

Settings of CandleBot allow you to trade with 29 candlestick combinations. Each of them is switched on and off at the discretion of the trader. Why was it made:

The basis of the combinations is the formation of the trend figures, based on which we can conclude about the approaching turn or on the contrary strengthening of the trend. The recommended timeframe is H1, the zero bar is not being used.

There is no possibility to describe all candlestick patterns of CandleBot. On each of them you can write a whole article. Just going to list some of them: harami, shooting star, hammer, piercing, belt hold, three ravens, counterattack, dodges, etc. Characteristics of profitability and maximum drawdown in testing of 2 years you can see below. 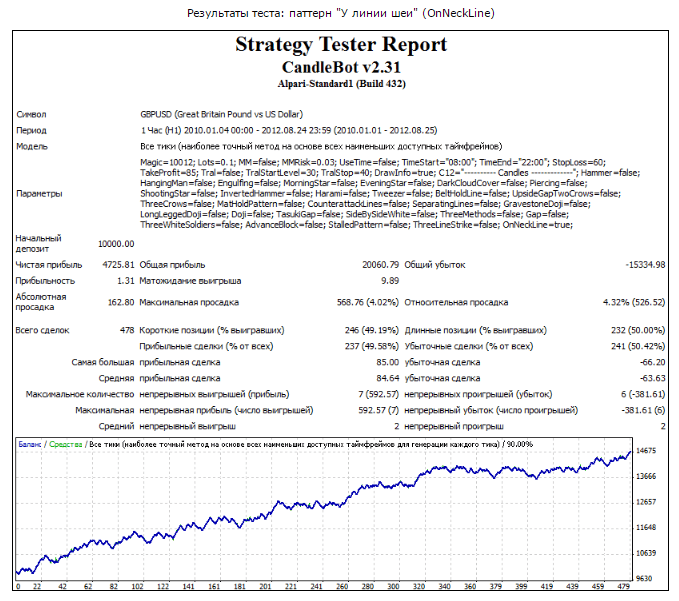 The settings of the indicator (except for “Enabling of candlestick models”):

Summary. CandleBot — advisor, with which you never get bored. Scope for experimentation for professionals and a great springboard for beginners who want to understand the principles of technical analysis. Manual strategies require the use of each piece individually. Absolutely all basic shapes are arranged here. You will hardly find any reviews about CandleBot.  This robot is too specific:  in different hands and in different situations behaves differently. You cannot compare two different strategies together. And when the robot has not just two tactics, but 29 – it is almost impossible. So download it, install and try!

The best binary robots and reviews about them