We continue to consider examples of graphic strategies in binary options trading. In the last article attention was paid to several types of “triangles”, which build a price trend. In this article we will look at two other similar shapes that often appear on charts of the currency pairs — the flag and pennant. Please note that the graphic strategies in binary options are complementary and work in tandem with indicators of technical analysis!

The figure of “flag” is formed in the market when traders are taking a pause for decision-making. The flag is one of the signals that the trend will continue, confirming the possibility to open positions.

The emergence of the flag should be strong, more vertical in relation to the price. In other words, the market is going in a certain direction, then there is a correction and the market continues to fall in the same direction.

The figure below shows an example of the flag with its main components.

Interpretation of the figure. Graphics strategy shows the mood of buyers and sellers. In this case, level “A” the number of buyers more than sellers, which drags the price increase. With the increasing number of people wishing to sell the asset, the balance of supply and demand is aligned. After the correction (profit-taking) buyers again start buying the asset, based on past positive experience. 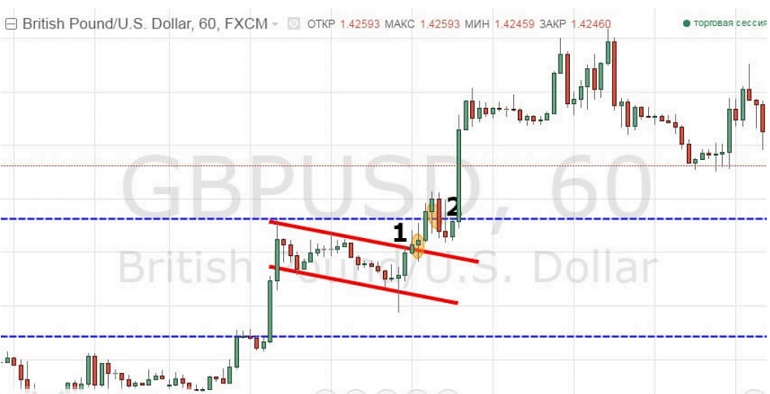 You cannot open a short position, as the possible continuation of the correction stage. The expiry time of a binary option – not  least than 5-6 candles.

Similar to the principle of building to the “flag”, signaling about the market correction and its further continuation. In appearance resembles a triangle, but the time of its construction much faster.

A distinctive feature of the “Pennant” from the “flag” in that the “flag” levels of resistance and support are parallel to each other, and the “pennant” converge at one point. You can  determine the direction of the trend by tilt of the figure and its flagpole. First, the “Pennant” is tilted in the opposite price trend direction. Secondly, the presence of the flagpole is a fundamental distinction of “pennant” from the “triangle”.

Interpretation of the figure: after the formation of the figure the price breaks the resistance level (bullish trend) or support (bearish trend) and goes on. Market correction means the achievement of  the balance, but the strength of the trend still remains, which means that it will continue in the same direction.

Position opening. The break of the price, for example, of the resistance level of “pennant” speaks to the strength of the trend, at this moment it is recommended to purchase a Call option. If the price broke the level, do not hurry, because there is the possibility of formation of another shape and changing the direction of the price chart.

Important: it is not recommended to open a position immediately after the breakdown of any of the levels, because the price could go back into the corridor. Wait until the price fixates slightly lower (higher) level and then open the position.

Graphic strategies will be more accurate if use RSI (relative strength index) indicators and moving averages with different periods.

The graphic strategies: the triangle