Just recently I came across an interesting site with brokers in different categories. And although I have the prejudice to ratings, something in it appealed to me. First, it is still a link to a fairly authoritative economic website, conducting educational courses and not a broker, and secondly, the principle of its compilation. And if most of the rankings I can neither deny nor prove, something to criticize it would be worth. The best Forex brokers are divided into several categories, and the speech of them is below.

Question: how would you determine which broker is better or worse? To collect all the reviews from the Internet is not possible. And what are the criteria to determine who is better? For someone no slippage is important, and for someone — spreads. Because of that, there are many brokers, because among them there is a competition, and each trader is adherent of a particular company for some of its services. Someone will say that the leader can be determined by the number of customers. A reasonable review, but let’s think about a broker that enters into the five of leaders. How much litigation does he have? Like no one else… So that is not an indicator.

The authors of the rating “Best Forex brokers” decided to calculate the lead in the number of queries in Yandex. That’s what they did. 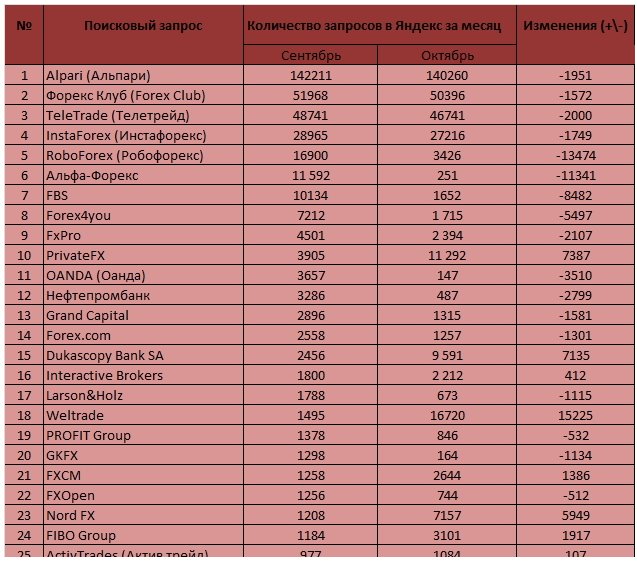 It is very easy to check! Open wordstat.yandex.ua and check the numbers. Teletrade — 31 267 in September and 15 855 requests in the English layout, in the amount of — 47 122. In general, approximately the numbers do match. But here’s the thing: how to define what is meant by the user entering the query? After all, when we want to get specific information, we have it hammered into search engines. For example, “the Alpari comments” or “Forex Club license”. Maybe with such a query person wanted to know about the fraud company?

By the way, the following table shows a comparison of the number of queries month-to-month. This figure does not suggest that the broker with the largest positive trend is really “cool”. Alternatively, increased interest in a particular month is associated with a marketing campaign.

Subsequent analysis showed that the smallest interest in Forex came in 2014. Also an analysis of geo-referenced queries was made, which shows the region in which the Forex market is interested the most. 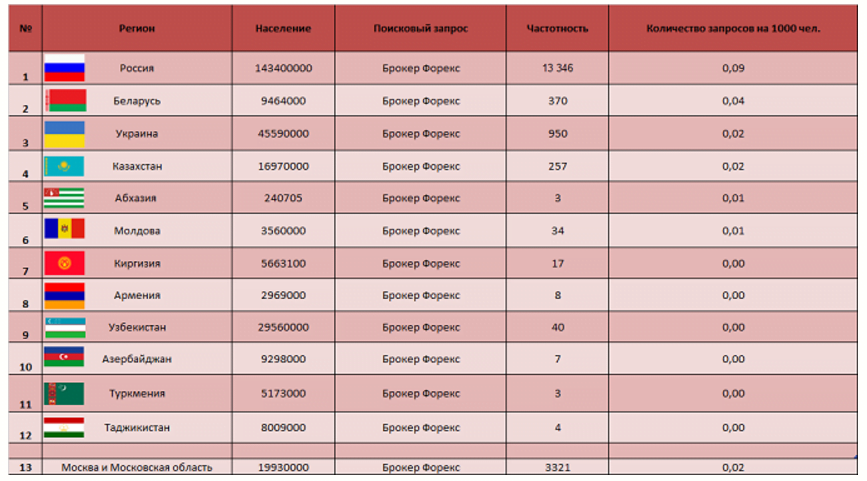 Also the ranking gives the number of references to brokers in the media, on the basis of which the conclusion was drawn about how a broker can be called the best. I will not provide the results, because I believe that it is only an advertising.

Best Forex brokers were determined by voting on the website compiler, because there is not the slightest guarantee that the rating is not stranded. 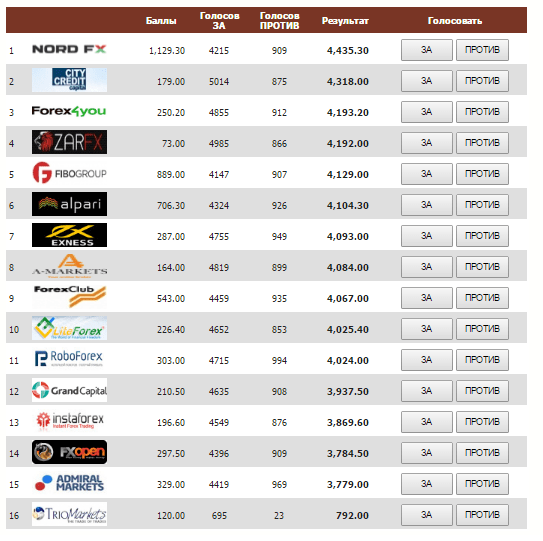 To check the actuality of the votes is difficult, but can be guided by the following principle: the more aggressively the broker imposes himself, the greater the likelihood that the broker is a fraud. It is logical that good broker make a name for himself an impeccable reputation, not advertising. To find negative feedback about the leader of the rating — Nord FX was not possible. In Russia it is less known than in Europe, but the lack of negativity is optimistic. The situation is similar with City Credit Capital – a European broker who works only in that region (US customers are not served). In Russia, the broker also is presented, but is little-known.

Summary: best Forex brokers in this ranking may be the best one. But about the objectivity of the rating to judge to you, our dear readers.

According to the authors, the rankings were based on the opinion of independent experts, traders and analysts. However, the rating could be subjective as we are talking only about the visitors of the Internet resource. 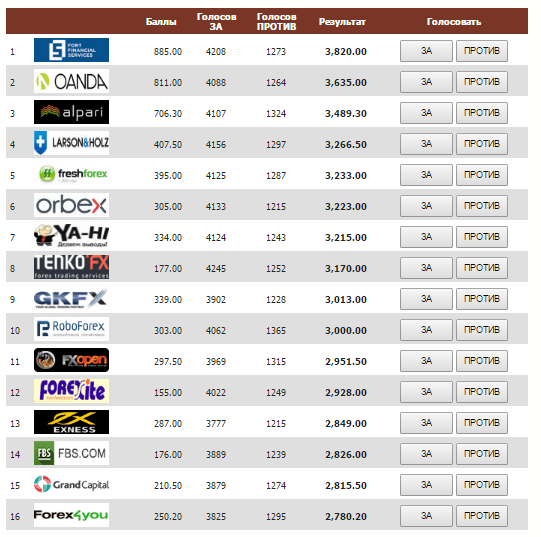 Alas, on the very first company on the Internet there is a specific feedback — “kitchen”. Yes, and it is not clear why in the list there are only a few market leaders, and even not in the first position. With the second broker list the situation is similar. Alas, the rating raises more questions than answers.

In theory, these brokers have to be all, but in fact on real market directly, bypassing the broker, withdrawn only the large customers, and not all brokers. This rating is very controversial, because you have not defined selection criteria. However, judge for yourself. 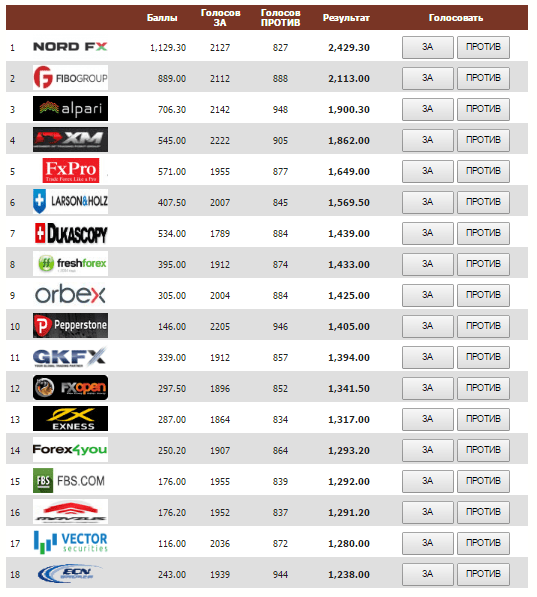 Summary. Taking into account that the originator of all these ratings is the same, I have formed the following impression:

This article is informative. I think you would be interested to learn about the best Forex brokers, may be you discovered a new name. And yet my opinion remained skeptical — ratings should not be trusted, and to choose the best broker use reviews of your friends and remember the rule: “no good deed goes unpunished”.

How to check the speed of the broker’s platform