In a simple sense arbitrage in the Forex market — the opening of the opposite or the same positions on different correlated assets. The purpose of the arbitration — insurance and profit. If there is an understanding that the market of the underlying asset might suddenly turn around, but there is a linked asset (e.g., the dollar and the Euro at the same time react to the events associated with China), one asset is set as long position, the second — short.

There is another option of arbitrage in the Forex market: offers the same position on diverse assets. For example, if the securities of U.S. companies are rising, the dollar falls. So indefinitely (in any case not volatile!) the market should open two long (short) position in both markets and wait. Once the trend becomes clear, unprofitable position closed.

Classification of arbitrage in Forex

Arbitrage in the Forex market is built on imbalance prices. On different exchanges pricing have come under pressure from many factors, and intelligent professional trader will quickly understand what  triangle arbitrage should be built. An example of such  triangle:

The following is an example of triangular arbitrage, where currency A is US dollar, B — canadian dollar, C — Swiss franc. 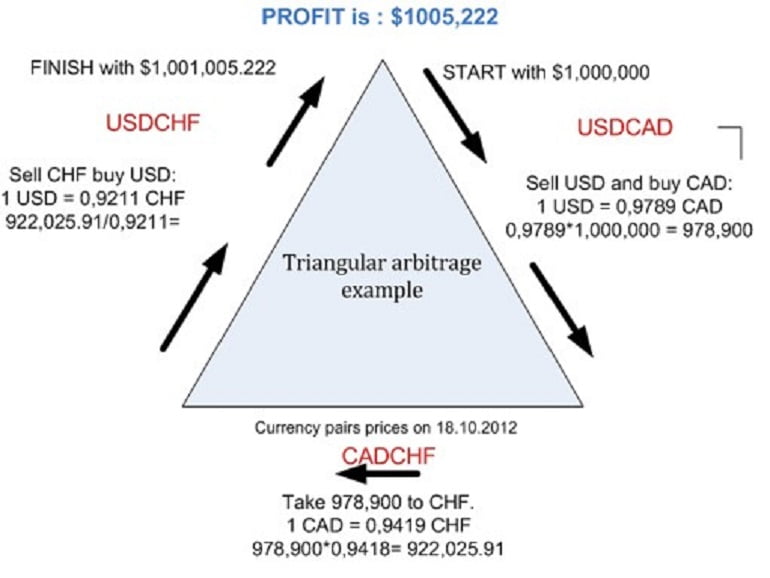 The advantages of triangular arbitrage:

An example of arbitrage strategies in the Forex market. Based on the historic data of two correlated currencies and follow them. As soon as the correlation weakens, weaker pair is bought, the stronger is sold. And when the degree of correlation is returned to the previous level, it is possible to fix profit. In arbitrage trading, it is preferable to work with the daily charts.

For those who want to try themselves in statistical arbitrage (simultaneous bying and selling or buying two different assets), note on the currency pair Euro/US dollar and US dollar/Swiss franc. They often move in opposite directions.

Often arbitrage in the Forex market is so successful strategy that some DC (not related to brokers) prohibit such transactions. Actually, it is logical — dealing centers, scrolling through the transactions themselves, such low-risk strategies lose the spread.

The pros and cons of slippage: 5 ways how to resolve this issue